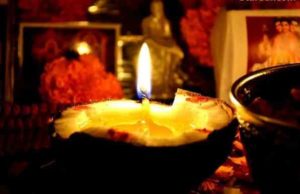 Death rituals performed at the death of a member in the family involves informing other bunts in the neighbourhood by a harijana. This is called “marana helike”. The messenger is paid by the recipient of the message.

Women keep a watch on the body as the close relatives and neighbours arrive. The cremation should happen within a day of the death. Therefore, unless preparations are made, the cremation is done without waiting for all relatives to arrive. It is customary for everyone to bring a punotha kuntu (white piece of cloth) to put on the body.

The harijana and assembled men prepare the kaata (pyre). The family usually have a doopeda kanda, an exclusive piece of land for cremation. The kaata is made of logs from freshly logged mango tree. It is also common to use coconut shells or other dried firewood along with the fresh logs, especially in rainy season, to aid the burning process.

As the “kaata” is being prepared, turmeric powder mixed with oil is applied on the body and cleansed with warm water. If the deceased is the male person, close male relatives perform this ritual and if a female, female relatives perform the ritual. The puna (corpse) is wrapped in a piece of cloth and brought inside the house. The puna is dressed like a bride (if deceased is a female) or groom (if deceased is a male). All jewels are taken out of the body and a piece of gold is put under the tongue. A garland made of ‘tulasi leaves’ is placed on the puna.

The puna is then shifted to a single plantain leaf, head facing the south as part of the death ritual. Close relatives and neighbors place sheets of cloth they have brought with them on the puna. Sandal wood and flower wreaths may also be placed on the body. All close relatives put water in the mouth of the puna. This is called “neer budpune”. After the completion of this ritual, the puna is carried to the kaata by the son and other assembled men. This is called puna-deppune.

The men chant “Govinda Govinda” as the puna is carried to the kaata. The puna is carried around the kaata in anticlockwise direction and placed on the kaata, head facing south. In some cases, the clothes put on the puna are removed and donated to the harijanas. Additional wood is placed on the puna to cover it fully. The eldest son puts the fire to the kaata near the feet of the body. All the items used, such as plantain leaf, incense sticks etc. are bundled together and thrown to the kaata. The men wait till most of the body is burnt, specifically, the chest part is burnt before leaving.

The people come back and have bath before entering the house. The house is cleaned. Rice and chutney are prepared for the assembled people. The assembled elders decide on the next rituals. The family is in suthaka till the bojja or uttara kriya.

On the fifth day after the cremation, the boodhi oppa or boodhi mucchune (covering the ashes) is observed. The madiwala comes for this ceremony. The ash is made into a heap. The skeletal bones are collected and tied in a white cloth and put in an urn and tied to a tree branch. The ash is then covered and dhoope (mound) is made. A tulsi plant is planted on the dhoope.

The male members of the family shave their head and facial hair as a respect to the dead. The madiwala performs this part of the death ritual. The bojja is performed on the eleventh or the thirteenth day after the cremation, avoiding a Friday or a Tuesday.

After boodhi oppa ritual the heir of the family fills a chembu with water and keeps it next to a deepa in the chavadi. This death ritual is called “neer deepune” The water is changed twice a day. The other members of the family may join him. All participants pay respect to the dead by tying their hand behind the head and walk around the “water” in anticlockwise direction three times. This ritual is continued till the uttara kriya.

If the family decides to build a gori (monument) for the deceased person as part of the Death Ritual, it is built over the dhoope. The construction of thegori is completed before the bojja or uttara kriya ritual.

On the uttara kriya day, the madiwala gives shaving to the family members. The carpenter decorates the dhoope or the gori. He makes a wooden replica of the deceased person (called neer nirel). A feast is prepared in the honor of the deceased person. The menu should contain kayi (plantain) and kumbuda (ash pumpkin, winter melon) curry, and aritha payasa (rice pudding). Individual members of the family sponsor various items like holige, laddu, jilebi etc.

After the meal is prepared, all items are served in a banana leaf and placed at an elevated place away from the house for the crows (kakkeg deedune). Crows are supposed to come and eat that food. Crows are considered as representatives of our ancestors. After the crows touch the food, people eat the meal.

On the sixteenth day after death, the ritual of padinaji koodisavune (aligning the kule or spirit of the deceased with other spirits of the family) is performed. This ritual is performed by women. Sixteen banana leaves are placed along the wall in a room and the seventeenth leaf is placed away from the first sixteen. Non-vegetarian food is served on these leaves. A bowl, made of banana leaf, filled with toddy is placed with the food. Dhoopa (smoke) is held over the food. The eldest woman of the family performs the prayer. She then joins the new spirit with other spirits by joining the seventeenth leaf with the others. The spirit now rests in peace.

The spirits are then remembered during pithr paksha as well as during parba or diwali (deepavali). On these occasions, special food is prepared and served to the spirits of family ancestors. This is called kulekuleg balasune. Female members of the family perform this ritual. During other festive occasions, such as special days or functions, the meal is offered to the spirits as soon as the food is prepared.

Source: With permission from www.delhibunts.com

See this interesting blog, where the author has reviewed a book on this topic. Here is a blog on Somanatha temple – this is a usual place of visit to conduct part of the death rituals.