Chennemane or Chenneda Mane has been the popular indoor game played in Tulunadu region during Aati month. This game is a symbol of the culture and heritage of Tulunadu. It is interesting for all age groups from 3 year olds to 100 years old. It was a great way for the family members to bond with each other playing these games for hours on end. There are beliefs that the game should not be played between husband and wife or between two sisters as it will result in clashes.

The beauty of the game is not only its recreational value, it also develops IQ as it shares some features of the popular game of chess. It is a reflection of the supremacy of the ruler in the society. The rent system of using of the property of the King or landlords shows political, social and economic imbalance of power in the earlier times.

‘Mane’ the Tulu word used to represent the wooden board is in rectangular shape. The design of the board (mane) varies from place to place. There is no uniform measurement for the Mane. The game is played with  seeds of local trees like that of ponge (pongar) or coral tree or Manjottikai Gulagunji. It is popularly called ‘chennedakai’ or ‘Bithu’ in local language. Manjottikai which is available in plenty is the most common seed used in the game. Fifty six seeds are needed to play the game.

This game showed the strong bond people in Tulunadu had with agriculture. As there is not much activity in the agriculture field during Aati due to heavy rains, people preferred to play indoor games. Many of the terms used in the game are linked with agriculture. For example, “Bule Perga” (the produce earned) and “Muguli” (three seeds) indicating the green shoots of a plant.

Traditionally, Chennemane is played on the full moon day in Aati month after drinking “Metteda Ganji” or the “Paale Kasaya”. The game is played till Krishnastami. Then the Manes are kept away and removed only during next Aati. Most commoners had the Mane made of wood, while kings of the region made them of gold or silver.

There is also the “Seete Aata” which can be played by only one. This is a never unending game. This is said to be the game which was played by Goddess Sita while she was waiting for Lord Rama. In this manner, there are different variants of the game namely Joduperga, Kodillkatta, Mantriyata, Ajjinakar, Katari, Mata, Ekkadi, Kompalachenne, Anchil-Bachil, ArateMukve and ErateKatte.

Unfortunately with the passage of time, other indoor activities like television, mobile and online games started gaining prominence. Playing Chennemane as a game or even traditional makers of the mane are slowly fading into oblivion. The Manes are only finding a place in a dusty loft or in heritage museums. Chennemane and other games in Tulunadu have been compiled in the book “Janapada Aatagalu” written by Gananath Yekkur.

Those who do play it, are now playing it throughout the year. You need not have a Chennemane to play the game. You will find a similar game online called Mancala, an African count and capture game. The only difference is the number of pits. While Mancala has six pits on each side, the traditional wooden Chennemane in Tulunadu has seven pits.

Here is an nice video in Kannada which gives more details. 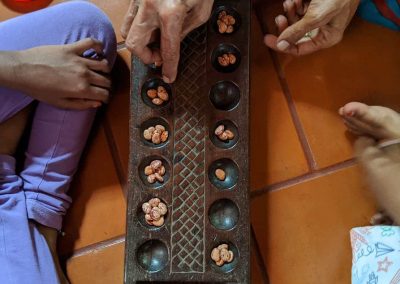 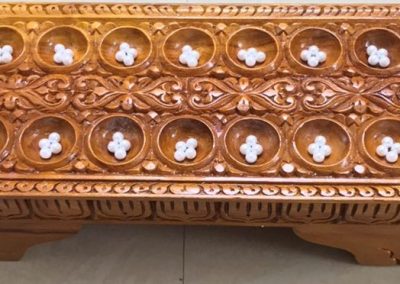