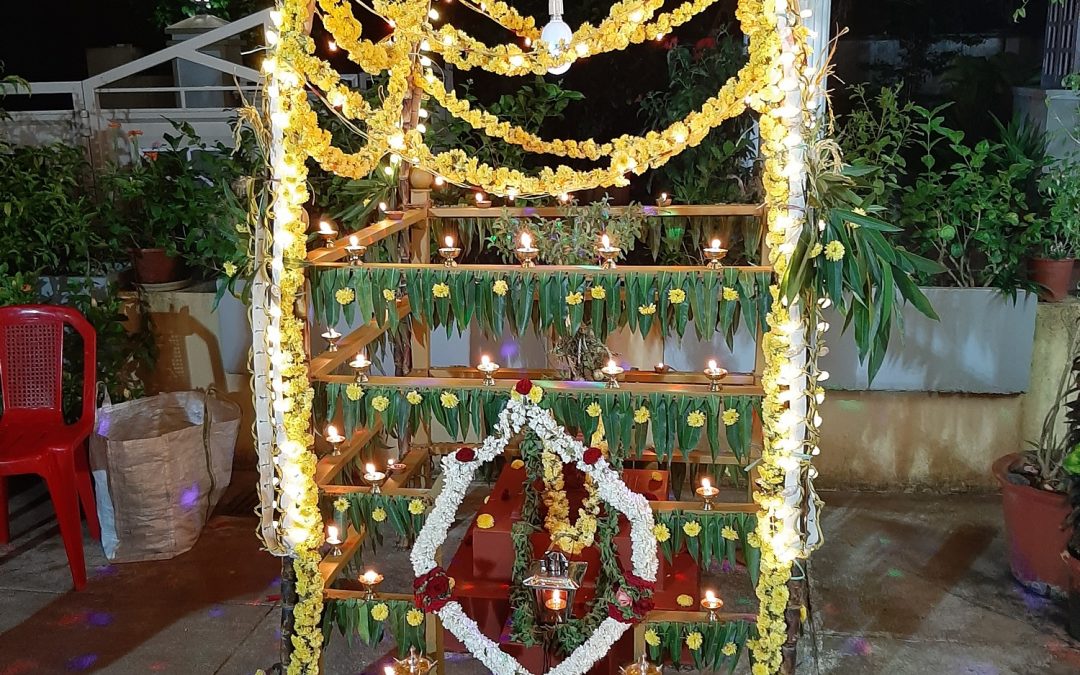 Tulsi pooja is performed on Tulsi  plant (also known as holy basil), which is found in the courtyards of almost all Tulunadu houses. People of Tulunadu perform Tulsi puja by painting its platform, performing Arati, singing Bhajans, and distributing Prasadam in the form of a sweet made of beaten rice (Bajil in Tulu). The Tulsi plant is decorated like a bride and is then married to the idol of Lord Krishna of the gooseberry plant.

Tulsi Pooja is celebrated with grand fervor across all homes and temples in Tulunad region on this auspicious occasion. It is common to burst firecrackers around the time of final aarti as a mark of gaiety and add to the fun for children.

As per mythology, Tulsi was the wife of a demon called Jalandhara. Because of her austerities, total devotion and loyalty to her husband, he attains immense power. He could not even be killed by Gods. They were trying to eliminate him because of his evil deeds. To save the good from evil Jalandhar, Lord Vishnu, at the request of the Gods, approaches Tulsi by appearing in the physical form of Jalandhar. When Tulsi touches Lord Vishnu, thinking him to be Jalandhar returning from war, her loyalty to her husband gets diluted, and Jalandhar is killed in the war.

An angered Tulsi curses Lord Vishnu before immolating herself by sitting on a pyre, saying that he would suffer separation from his wife in future. This curse comes true in Ramayana. It is said that Lord Vishnu took the form of Indian gooseberry and married Tulsi, who had taken the form of holy basil, as per Lord Vishnu’s blessings. After that Tulsi took birth as Rukmini and married Krishna incarnation of Lord Vishnu. To commemorate this occasion, the marriage of Tulsi plant is conducted with the gooseberry plant as Tulsi Pooja.

Irrespective of the mythological importance of the occasion, Tulsi plant in nature needs to celebrated and rich tributes need to be paid to it, because of the multiple benefits people derive from it. Right from the use of its twigs for religious occasions or as an effective medicine for various ailments or as a repellent for mosquitoes or for beauty treatments etc, this “all-rounder” Tulsi plant is a must-have in every household.