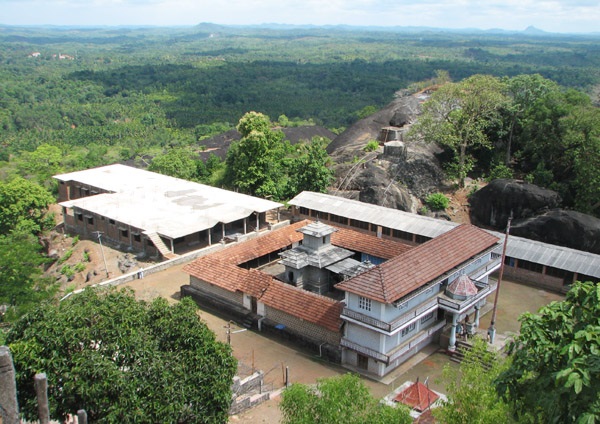 Karinjeshwara Temple is located 44 km from Mangalore city near Bantwal town. It is a beautiful place surrounded by Kodyamale hills and forests, located about 1000 ft above sea level. This huge rock mountain consists of two main temples at two levels, Parvathi and Karinjeshwara Temples respectively. There are a number of small ponds and a beautiful park too.  Devotees need to watch out for many monkeys along the way, which try to snatch bags or fruits.

The steps leading to the top of this rock hill are very well built and number about 355. The Parvathi temple at the halfway mark can also be reached by road. However, steps are the only way to reach the Karinjeshwara temple which is located at the hilltop.

The scenery in monsoon season is particularly beautiful with greenery, streams of water and clouds. The architectural style of this Karinjeshwara Temple is influenced by both Vaishnava and Jain styles of architecture. A stone sculpture on the base of the flag post of the temple, indicates that the Kelady rulers, who were under Vijayanagara kingdom had given royal patronage to this temple.

Karinjeshwara temple is believed to be one temple that has stood guard to all four yugas mentioned in Hindu mythology. It is noted that the temple was called  ‘Roudra Giri’ during Krutha Yuga, ‘Bhima Shaila’ in Dwapara Yuga, ‘Gajendra Giri’ in Thretha Yuga, and ‘Karinja’ in Kali Yuga.

It is believed that Bhima threw his mace on the floor and a pond was formed there, this pond is called ‘Gadha Theertha’. Further, the ‘Angushta Theertha’ was created with the thumb of Bhima and when he knelt down on the floor, another pond named ‘Janu Theertha’ was created. These ponds can be seen at the temple and they ensure uninterrupted supply of water to the temple throughout the year. Another pond named ‘Handi Kere’ can be found inside the temple premises.  This is believed to have been formed when Arjuna shot a pig with his arrow.

A holy dip in these water ponds on specific days is believed to cure skin diseases.

The ancient practice of feeding monkeys is still followed inside the temple. They feed monkeys on a daily basis and many devotees are also seen doing the same.

Another part of mythology says that Sri Ramachandra had visited this place along with his younger brother Lakshman. In this respect, an offering of a large amount of rice is made to the Lord during the noon pooja. It is then poured on a rock slab in front of the Shiva temple for monkeys. The leader of the monkeys, generally called “Karinja Dadda” is the first one to take a bite of “Naivedya”.

People gather in large numbers to watch a large number of monkeys coming from all sides of the forest to feast upon the hot rice prasadam.

Shivaratri is one of the most important festivals at the Sri Karinjeshwara Temple. On the day of Shivaratri, elaborate poojas are conducted and devotees throng this temple from nearby areas. The festival is celebrated for four days.

Another interesting hill temple in the same area is Narahari Sadashiva temple, which is about 20 kms away. 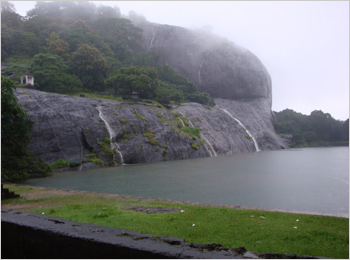 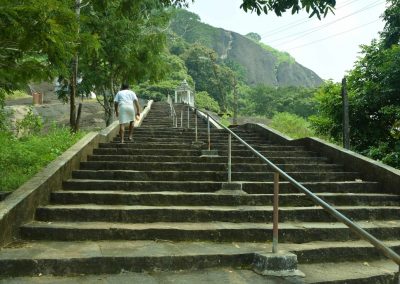 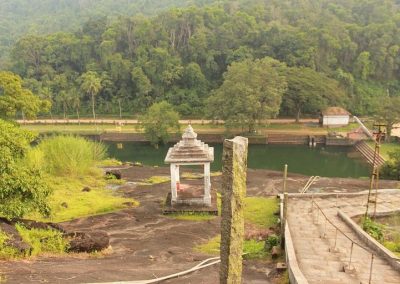 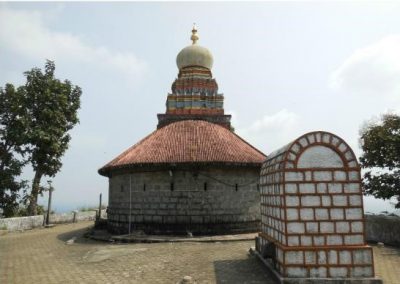 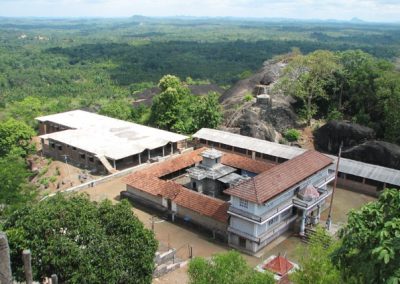 You can reach this place using the map.