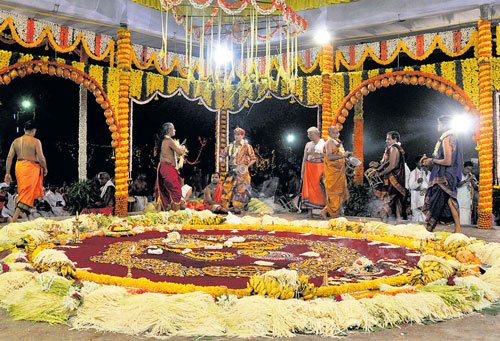 Dakke bali is a form of Nagaradhane or snake worship which is common in Tulunadu region. There are several Nagabanas (snake worship places) across Tulunadu and prayers are offered by all people without discrimination of caste or class. Dakkebali worship performed in Padubidri, Udupi district is significant because of the power of its blessings.

The event is held on specific nights between mid Jan to mid March i.e. from the start of Makara maasa till end of Meena maasa of Tulu Calendar. This is held once in two years, alternating with the Paryaya festival in Udupi. This year (2021), the event is being celebrated with devotional fervor like every other year.

The Dakke is a musical instrument (drum or dumroo) made of bronze & leather. It creates unique notes which are very dear to Naga dever (Snake God). The skills needed to play this instrument are learnt over time as a family tradition by the Vaidya community. The mystical features of Dakkebali are a culmination of all assembled devotees praying with strong Bhakthi (devotion), elaborate offerings made to please the Lord, rhythmic dances of the participants, and positive energies created by the music, deepas (fire), Mandala drawings, flowers, fruits & pingara (areca tree flowers).

As part of appeasement of the Lord, a man dresses to symbolize Ardhanaari (half man/half woman) or Nagakannika. He plays the Dakke to facilitate invoking the spirits leading to a Pathri getting possessed. A possessed Pathri is guided to move around the place of worship by the Nagakannika. The process of moving in circles around the worship place in a rhythmic dance is known as DakkeBali. This form of pooja is believed to please Lord Naga. The depiction of divine union of male & female snakes is the beauty of Dakke Bali and Nagamandala.

The Padubidri Brahmasthana lies within a small forest and is considered one of the sacred places in Tulunadu region. The place is dedicated to the Goddess Vanadurga also known as the Khadgeshwari Brahmasthana. It is about 3 kms from the beach and is a beautiful setting. The pooja place is decorated with deepa lamps, fire torches and without any artificial lighting. This makes the atmosphere even more glorious and enhances the devotional feeling among the visitors.

The pooja at Khadgeshwari Brahmasthana starts with a procession of pooja materials carried from the Mahalingeshwara Mahaganapathy temple. Devotees carry their offerings, called ‘Pude’ in Tulu language and the procession which passes through Padubidri town. The offerings mainly consist of fruits, flowers and tender coconuts.

The procession moves to the Nagabana where expert volunteers do alankara (decoration) of all the Sannidhanas and Bana. They set the stage for Thambila to be conducted followed by the Dakke bali which goes on all night. Towards the conclusion of the Dakkebali, the possessed Patri rubs bundles of pingara on his face signifying the acceptance of all the offerings made during the entire pooja.

The visiting devotees are offered the pingara, flowers, fruits and coconut as prasada. After having spent all night being part of Dakkebali process and enjoying the darshan (sighting), it makes a devotee feel relieved from earthly problems.

It is important to know that the people who are appointed pathri to perform during the DakkeBali are from a specific community.  This role is not inherited by heredity and eligible persons can only be through a special appointment process involving “Ashtamangala Prashne”. The number of people allowed to conduct this is dwindling in recent times.

Here is an interesting blog by Ajey Rao sharing his experience after attending this event in February 2009.

Photography and video recording is strictly prohibited at Khadgeshwari Brahmasthana.

Here is a video recording of Dakke Bali seve by family members of Murudi at their Brahmasthana (in the same vicinity).