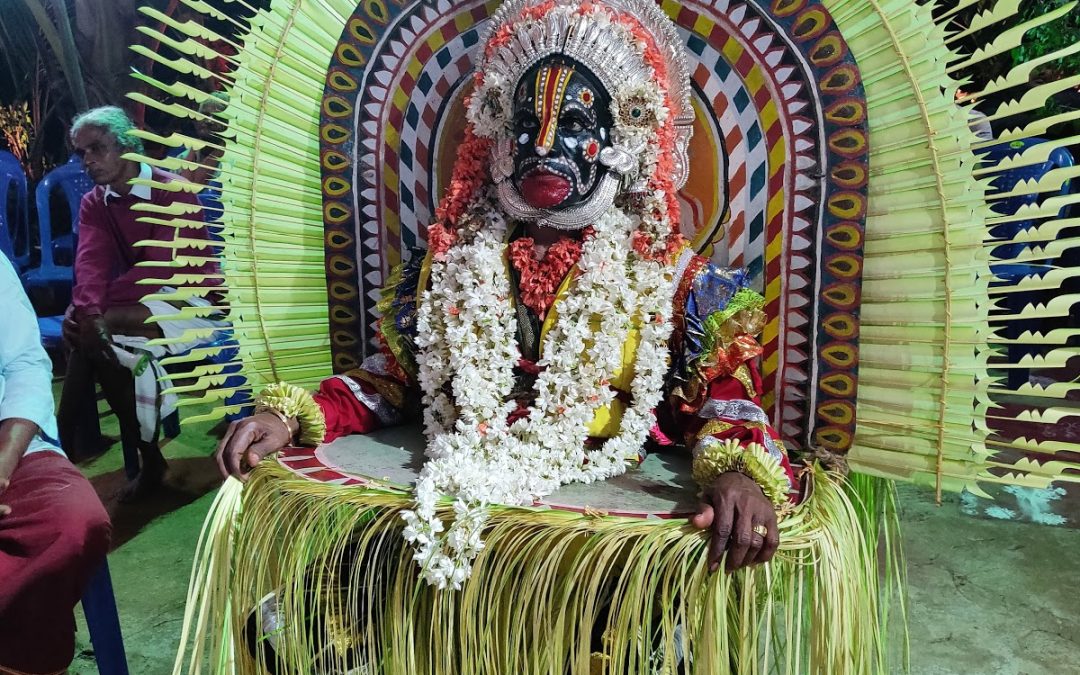 Bootha Kola is a popular belief where Bootha means ‘spirit’ and Kola means ‘play’ in Tulu. It is basically a spirit worship ritual celebrated by Tulu-speaking people. Each family is associated with one spirit as their deity, and they do worship them annually by this Bootha Kola ceremony. Kola is alternatively called “nema” which means the ceremony.

The family heads usually organizes these celebrations with contributions from the entire extended family. They believe that these spirits protect the village from calamities. It will also make them prosperous and the anger of these souls could bring them bad luck. The Bootha or spirit is often of common men who have elevated themselves to this position through a heroic act and are believed to have gained Godly powers after death. Some holy spirits also draw references to animals and others are believed to be Ishwara Ganas (representatives of Lord Shiva).

The ritual of Bootha Kola

Preparations for the night-long Bootha Kola begins in the evening, with the arrival of the ‘Bhandara’ (ie, the paraphernalia of the spirit) to the beautifully decorated ritual pandal.  The paraphernalia includes weapons such as sword, shield, trident and ornaments such as headgear, masks and jewellery.

The pandal is beautifully decorated with a variety of flowers. The deity has to be placed in the shrine which is to be decorated with the plantain, coconut leaves and flowers. It also contains an altar made by the coconut palm leaves and tender banana plants.

The performer or spirit impersonator usually belongs to a specific caste of people who have been at it from ages. As per common belief, any other ordinary individual cannot bear possession by the spirit and would die instantly if possessed.  The simple and innocent castes were chosen to be spirit impersonators in the early days. This is because in bygone days (and even now to some extent), the divine spirit used to administer justice and solve interpersonal and village disputes.  The understanding is that a simple and innocent minded person as an Oracle, would result in fair judgements and eliminate any suspicion of foul play. Thus giving credibility to justice and solutions offered by the Spirit.

The performer is given oil for the ritual bath to purify him and formally invoke the spirit. He adorns himself with elaborate costumes, applying appropriate colours on his face, wearing the “Gaggara” (anklets) and jewellery belonging to the spirits. His attire is complete with a coconut leaf skirt accompanied with the ‘Ani’ (signifying the halo stringed to the back). The skirt of tender palm leaves, which is inflammable, helps them to perform acts related to fire.

A female member of his family sings the ballad called Paddana that narrates the origin of the Bhoota, the significant events of its life, heroic deeds, virtues, etc.  On hearing the ballads, the spirit possesses the impersonator, which is evident from the convulsions in his body. A ritual typically, has 16 steps, which are meant to propitiate the spirit.  It includes dancing to loud rhythmic hypnotic music (drums and Shehnai), making ritual sacrificial offerings to the spirit – which include rice, chicken, etc.   The possession by the spirit provides them the energy to dance all night, bear great amount of heat, cause a great appetite – to drink  7-8 tender coconuts and even consume raw chicken blood and meat, with puffed rice.

They dance thinking themselves as the spirits. It is believed that a soul actually enters the dancer’s body for a few seconds, which gives the performer the energy to perform till the dawn. They can foresee the future at that time. There are singers to narrate the story of the spirit and its origin.

Post the Bootha Kola ritual, the faithful receive blessings and confidence from the spirit to face any problems in their life head-on.  In some cases, the spirit may also solve interpersonal or village disputes and provide guidance or demand future propitiation if not satisfied with the arrangements. The performer, after the ritual, typically is not able to recollect the events and describes the experience as a ‘trance-like’ or ‘sleep-like’ state.

In this Bootha Kola process, the entire caste table in the village gets reversed during the ritual – high caste landlords have to prostrate before a low caste performer, even as the spirit addresses them in singular tense.  Thus, it is a great social equalizer. Spirit worship even promotes communal harmony in the region – given that even Muslims worship Hindu spirits and vice-versa (Bobbarya, a Muslim Spirit is worshipped even by Hindus).

History is evidence that even the British administration kept a close watch on the prophecies of oracles, as large number of people believed in it.

See this interesting blog where the author has differentiated between Nema & Kola.