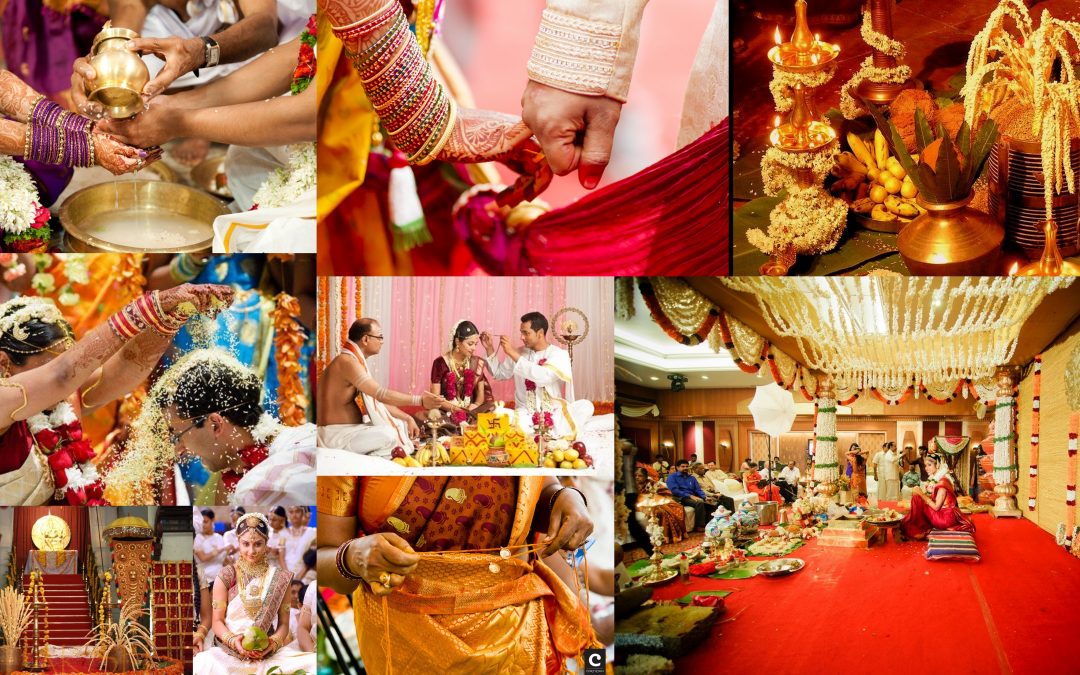 A Bunt Wedding is a sequence of steps with each part of the process having its own significance. While there is no definite uniformity in what is followed in different parts of Tulunadu, this article is an attempt to note down the most common way of getting a Bunt Wedding done.

A Bunt wedding (as is in any Indian community) is a union of two families rather than the union of two individuals. Social parity and a host of other factors are taken into consideration while searching for prospective matches. As per traditional Hindu culture, Bunt wedding also starts with the exchange of horoscopes by the parents of the boy and the girl. It is assumed that when the horoscopes foretell compatibility, things will progress smoothly. The young people then get a chance to see each other. After the prospective horoscopes are matched ‘Jataka kudunu’ – matching of the horoscopes by the astrologer, an auspicious day and time is finalized in consultation with the astrologer.

The men folk from the bride’s family proceed to the groom’s house carrying a silver platter laden with betel leaves, betel nuts and flowers. An elder from the family is assigned the task of introducing the two families to each other. This visit is a mere formality to confirm the date and time of the forthcoming Bunt wedding. The exchange of betel leaves and nuts is a confirmation of the alliance and the elders are a witness to it. These days the engagement might even be a more elaborate occasion, where the bride and groom exchange diamond engagement rings and the family follows this up by hosting a lavish party for close friends and relatives.

This ceremony is held separately in both homes. Traditionally this used to be a very simple ritual where just a dot of ‘mehendi’ was applied to the bride’s palms and finger tips, but has now evolved into a grand celebration complete with professional mehendi artists being hired to weave intricate designs on the hands and feet of the bride and her close female friends and relatives. ‘Mehendi is applied on the groom as well – but just as a symbolic dot on his palm.

The ceremony is held separately in both homes one day before the Bunt wedding. The bride is given a bath by the female elders with oil, turmeric and coconut milk. They then bless her. Her brother’s wife or any other older lady from the family leads her for her bath. After the bath she completes the ritual by wearing a new sari, gold jewellery and black bangles. The bride and groom then proceed to their ‘puja’ rooms and after a brief prayer go to the ‘Tulsi Katta’ (sacred Tulsi plant) to pray.

A similar ceremony is held at the groom’s house. The groom’s cousins and other close family relatives apply turmeric and coconut milk on his face, body and arms. The barber gives him a haircut and then his sister’s husband or maternal cousin leads him for his bath.

As per tradition, just before the wedding day, a Murtha is performed at the bride’s house. The Murtha is given a lot of importance in Bunt tradition. The groom would not have been invited for this function. Only the boy’s parents and the bride’s relatives are invited.

The bride prays to the Tulsi Katte (Tulsi plant) – traditional Bunt houses have a mandatory Tulsi Katte in the courtyard of the house (Tulsi is considered to signify Goddess Laxmi).The bride is then dressed and taken to a decorated chair. The bride is seated facing the east. The bride will wear a Kachipuram sari, mallige (Mangalore jasmine-studded) plait, a gold Patti around the waist, gold Vanki on the arm and a gold Mundale on her forehead. A Harivana (silver plate) is filled with raw rice mixed with haldi and kumkum (turmeric and vermilion) and coconut is kept on that which signifies the presence of Lord Ganapati. A tall kardeepa (wick lamp) is decorated with jasmine flowers and lit.

A female relative distributes red and green glass bangles to all the women present. The eldest ‘sumangali’ puts the toe ring on the second toe of the bride’s feet. Then five sumangalis (married ladies) put red and green bangles in a sequence on the bride’s hand. There is one black bangle to remove drishti. All the sumananglis will put Mangalore jasmine flowers in the bride’s hair.

Finally, they do aarti of the bride because she is considered the Laxmi of the house. They put haldi-kumkum and bless her. Elders and others present will also bless her. The function goes on for 45 minutes to two hours depending on the number of people present.

The groom will have a Murtha on the morning of the wedding; However, this is a very simple function where his maternal uncle’s wife or his paternal aunt adorns his feet with gold toe rings that he has to keep till the wedding. He too is blessed by all with the showering of rice.

In a traditional Bunt wedding, all expenses are borne by the bride’s family. However in recent times, ‘wedding expenses’ and ‘dowry’ if any is decided by the two families. In traditional bunts style weddings, the mantap (stage) is decorated with bunch of aracanut, mango leaves and jasmine flowers.

As per tradition of Bunt wedding, the bride wears a red or maroon Kancheevaram sari, Mangalore jasmine-studded plait, a patti (gold belt) around the waist, Vanki (armlet) on the arm, green and red bangles, a Mundale ( Maang tika) on the parting of her forehead and a pair of diamond stud with jumkas in her ears. The groom wears a traditional dhoti though modern Bunts wear sherwanis.

The wedding is conducted by the bride’s family. So the girl comes to the wedding hall first – 30 minutes before the Dhare. Before entering the hall, the brides’ sister – in – law will wash her feet with water. And bring her inside the hall where Bride’s aunt and other sumangalis (married women with husbands) will do aarti and put haldi-kumkum.

The bride’s sister-in-law or mami (father’s sister or maternal uncle’s wife) will lead her to the mantap with the other members of the family and will seat her on the right side facing the audience. As the bride enters, a Kombu (trumpet) is blown. The same procedure goes for the bridegroom too. The bride’s brother will wash his feet and groom’s brother-in-law will lead him to the mantap. He will be seated on the left side of the stage facing the audience.

In a Harivana, raw rice mixed with haldi-kumkum is kept. A silver chambu (silver pot) with holy water, coconut flower and a coconut on top is also kept which signifies the presence of Lord Ganapati. A very tall deepa is decorated with jasmine flowers is lit.

The bridegroom’s mother and his family members give Poov Sere (flowers and sari), haldi-kumkum and jewellery to the bride. A priest will perform the Pooja in the mantap and take the blessings of the Almighty and elders gathered there. The ceremonies are guided by the bride’s maternal uncle.

The bride and groom are asked to take seven rounds of the stage. They are led by the boy’s brother-in-law and sister. Then they will exchange garlands. The girl goes first followed by the boy. The Kambu is blown at high pitch immediately followed by Dhare.

The bride’s parents in the presence of her maternal uncle, his wife and elders of her family perform this ceremony. A brass ‘Dareda chambu’ (vessel with a spout) filled with ‘Theertha’ (holy water) is held by the bride’s parents and taken to all the elders of both the families for their blessings. An antique gold coin known as ‘nanya’ is placed on the bride’s palm beneath which the groom places his hands and the bride’s parents pour the water from the ‘chambu’ onto the couple’s hands. This ritual is called dhare.

The ‘Mangalsutra’ (gold chain with black beads), is blessed by 5 ‘sumangalis’ (married women) and the groom ties it around the bride’s neck. He will then slip the vadungila or wedding ring to her right ring finger. The bride then slips a plain gold ring on the groom’s finger. The bride and groom are made to hold the ‘chambu’ and sit down and rise three times in quick succession. This is known as the ‘dhareyeruna’

The Brahmin lights the sacred fire known as homa or sacrifice is performed amidst Vedic chants. The bride’s brother puts fistfuls of puffed rice into the hands of his sister and the groom, which they in turn offer into the sacred fire each time they go around it, namely three times.

After that, the bride and groom are asked to come down from the stage, go out of the hall and pray to the Sun God (surya darshan). The bride’s brother will wash the groom’s feet, and the latter has to reward his brother-in-law handsomely for his troubles.

The couple then re-enter the hall. The bride’s mother will give tender coconut to the groom and he has to drink little and give little to his wife (signifying a commitment to share everything). His mother will give the bride a gold memento as a gift.

All the women from girl’s family will give the bride’s hand to the boy’s mother or an elder member of his family. During this, they sing a song or speak words of praise for the girl and how they have brought her up like a princess. The boy’s side will say they will accept her as their daughter not as their daughter-in-law.

After the wedding a feast is arranged and a traditional five-course vegetarian meal is served. Thereafter the bride leaves for her husband’s home. The exit from the place of wedding takes place at an appointed time, according to the muhurta. The bride, after receiving aashirwada or blessings of the parents and the elders present, takes her leave.

This article is being reproduced with permission of the author Smt Navanitha Balajith. It was originally published here. The author is an accomplished Bunt spending her energies propagating Bunt traditions in  Facebook groups “Bunts Community Worldwide” and “The Mangalorean Cuisine”.

Here are some of the popular wedding venues in Mangalore town