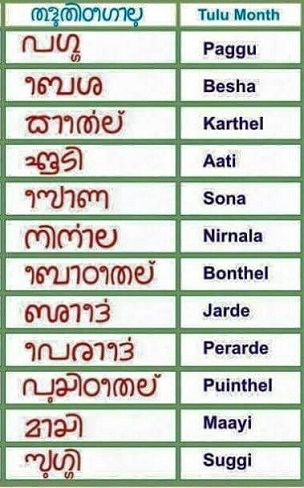 Tulu Calendar is one of the oldest Indian solar calendars and traditional ones still being used. In our day to day lives, most us follow the Western or Gregorian calendar that consist of twelve months from January to December. But Tuluvas have a specific calendar with our own twelve months for agriculture activities, religious activities and festivals.

Contents hide
1 Months as per Tulu Calendar
1.1 Days in the month you should know
1.2 Seasons of the year
2 Important events through the year
3 Paggu (April–May)

A year is called as ‘varsa’ or ‘orsa’ in Tulu and Calendar is Panchanga. The first day of this calendar falls on Bisu (mid April) in ‘Paggu’ month and this day is celebrated as Bisu parba in Tulunadu. Each month has 30 to 31 days and the first day of a Tulu Month is called as Thingade or Singade. The last day known as Sankramana or Sankranthi.

Months as per Tulu Calendar

Days in the month you should know

Seasons of the year

Important events through the year

Pattanaje Tenth day of the month

If there are important annual events missing in this article, please feel free to leave a comment.