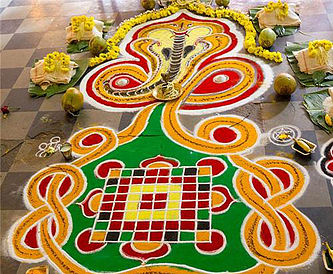 Naga Aradhane is a form of snake worship which, along with Bootha Kola, is one of the unique traditions prevalent in Coastal districts of Dakshina Kannada, Udupi and Kasaragod alternatively known as Tulunadu.  Practiced by Tuluva community members, snakes are not just seen as deities, but as an animal species which should be respected, appeased and protected for multiple social, religious and ecological reasons.

These prayers and rituals are undertaken in the community for the welfare and well-being of all the connected families.

Snakes have been associated with power, awe and respect in India. According to Hindu mythology, Lord Vishnu rests under the giant snake, Adisesha. Lord Shiva wears a snake Vasuki around his neck.

It is difficult to trace the origin of Naga Aradhane, though some clans among Tulu people claim to be of Nagavanshi descent. It is possible that snake worship was popularised by them. Though most rituals of snake worship are done by Brahmins, there is not a single Bunt house that does not have Nagabana. This is where Nagadevatha is worshiped according to Aliyasantana Lineage among Tuluvas. Nagamandala, Ashlesha Bali, Dakke Bali are different types of pooja done for snakes to appease them.

The snake worship rituals practiced in Tulu Nadu are quite unique and different from the other rituals. Snakes have their own shrines in a sacred grove known as Nagabana. The shrines have images of cobras carved of stones. Nobody is allowed to chop the tree near the Nagabana. It is also believed that snakes, specifically the cobras should not to be harmed or killed by anyone. If done so, the individual has to perform a ritual to cleanse the sin of killing or harming the snake. The belief is that the individual who refuses to perform the ritual will be cursed by the snake for eternity.

It can also be noted that in Tulu Nadu or the South Canara region in Karnataka, agriculture is predominant and paddy is the main crop. In these fields snakes help in saving the crop from rodents. This could be a plausible reason for worship of snakes.

There are two distinct rituals performed in reverence to the snake; Aashleshabali and Nagamandala. Of these, Nagamandala is the longer and more colourful of the two. Nagamandala depicts the divine union of male and female snakes. It is generally performed by two priests. The first priest, called patri, inhales the areca flower and becomes the male snake. The second priest, called Nagakannika or the female snake, dances and swings around an elaborate serpent design drawn with natural colours on the sacred ground.

The ritual is supplemented by playing an hour glass shaped instrument called as Dakke. The drawings in five different colours on the sacred ground are white (white mud), red (mix of lime powder and turmeric powder), green (green leaves powder), yellow (turmeric powder) and black (roasted and powdered paddy husk). Aashleshabali is similar in nature to the after-death rituals performed for the humans as per the Hindu tradition.

The ritual, centered on the serpent design, continues till early in the morning. A similar ritual is found in Kerala and is known as Sarpam Thullal and Sarpam Kali. All communities of Tulu Nadu revere snakes.

Nagabanas or the sacred groves are deemed to be the resting place of snakes. Cutting of trees or defacing the grove is considered as sacrilege. People are wary of the snake-bites and also want ecological preservation.

See these visuals to know more about the Naga Aradhana rituals. 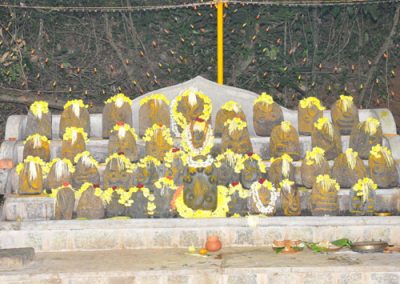 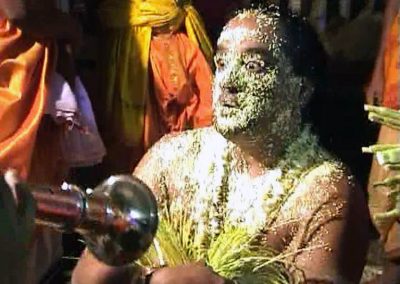