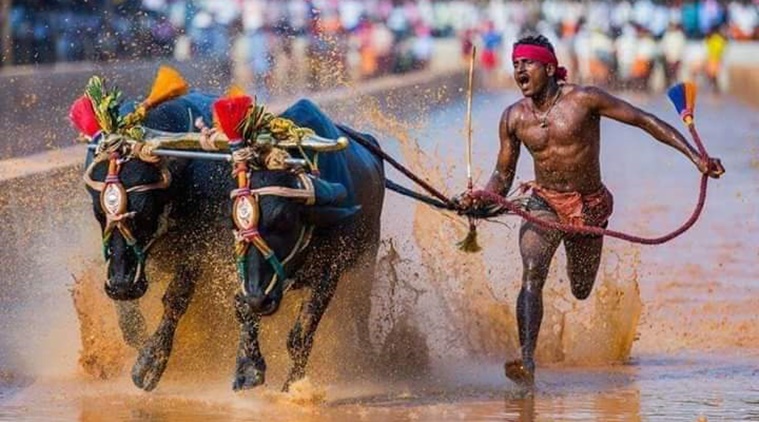 Kambala is derived from the word ‘kampa-kala ‘, where ‘Kampa’ is a slushy and muddy field. It is a traditional simple sport, which entertains rural people of Tulunadu region. The racetrack is a slushy paddy field when its not sowing season, and the buffaloes are driven by a farmer.

Traditional Kambala was non-competitive and a pair of buffaloes were run one after another. In modern times, a contest usually takes place between two pairs of buffaloes along parallel tracks prepared for the same. In villages such as Vandaro and Choradi, there is also a ritualistic angle to the sport. Farmers here race their buffaloes as a gratitude for protecting them from diseases.

Historically, the winning pair of buffaloes were rewarded with coconuts and bananas. Today, winning owners earn gold and silver coins. In some competitions, cash prizes are also awarded.

Kambala has become an organised rural sport with elaborate planning and scheduling, to accommodate competitions at different places and levels. The season generally starts in November and goes until March. Special Associations are formed to conduct the races. There are currently 18 such associations. Over 45 races are held annually in coastal Karnataka.

It draws large rural crowds, as it has done for the last five hundred years. People bet on the buffaloes, and one can witness more than 20,000 spectators in a well-organised Kambala, egging on and cheering the buffaloes to complete the race. In some places, night races are arranged under floodlights. The buffaloes developed for the race are carefully fed and special care is taken for the competing buffaloes.

The festival begins with a ceremonial parade of the farmers along with their buffaloes. The racing tracks measure around 120 to 160 metres in length and 8 to 12 metres width. Tracks are ploughed into a muddy field that is made runny with water. The Buffalo races continue overnight as well at different levels and the grand finale of the race is held to determine the winner of the race of that particular area.

The belief around this is, its a festival that originated in the farmer’s community of coastal Karnataka around eight hundred years ago. The festival is purely dedicated to Kadri’s Lord Manjunatha, who is a form of Lord Shiva. It is believed that the celebrations happen to please the Gods for a good harvest. It is a form of sport for the farmer’s community and also another belief is that it is considered as the sports of the royal family.

Kadri Kambala used to be held at Kadri, Mangalore and it is called Dēvere Kambla (God’s Kambla) as it is associated with Sri Manjunatha Temple in Mangalore city. This event was patronised 300 years ago, by the royal families of Mangalore. For this reason, Kadri Kambla is also known as Arasu Kambla (King’s Kambla).

Animal lovers have criticized Kambala as cruel to the racing buffaloes, which are driven by whips. Noted animal-rights activist Maneka Gandhi expressed concerns about ill treatment of buffaloes during the race. Government has banned the riders from using harmful whips during the race.

In 2014, based on lawsuits filed by animal welfare organizations, the Supreme Court of India ordered a ban on Kambala. The passage of Prevention of Cruelty to Animals (Karnataka Amendment) Bill, 2018 re-legalized the festival in Karnataka.

You can see a wonderful video by Dr Ganesh Amin Sankammar on this topic here.