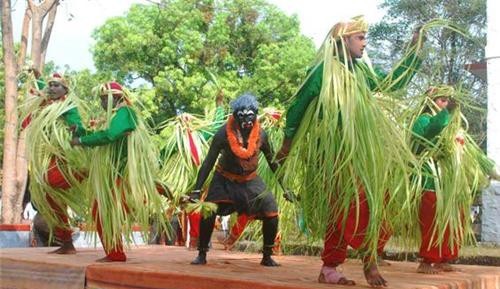 Kangilu Nalike or dance is a famous traditional folk dance rooted in Udupi and surrounding areas of Tulunadu region. “Kang” in Tulu language means arecanut tree. The dance has gained the name because the dancers wear costumes made out of arecanut fibre. This dance is performed on the full moon day (Pournami) of Maayi month in the Tuluva calendar (around March).

It is more a devotional dance and so appreciated by people with a strong connection to religious ceremonies. The villagers highly respect this dance form as they believe that this saves them eternally from all diseases, evil powers and other negative energies. Therefore they follow it with the same devotion as Mundal and Gowda communities, who perform this dance.

Before Kangilu dance , the artists offer worship to their deity Kadageshwari or Mariyamma and then wear the costumes. There are 5 – 12 members in each group. All the 12 people wear the same kind of Vesha i.e. costume, make-up, face colors. During the performance a traditional Tulu song called the Karungilo is sung. Dressed in vibrant green & jingles in their ankle, the only paraphernalia for the dancers is a staff they use to dance. In certain places, they also wear a turban or head gear made of arecanut strips. Four singers with cymbals (thaala), one flutist and a drummer play in a rhythm from one corner of the dancing area.

Going in circles or topsy turvy, the intensity of the dance is electrifying & they create magic with the audience. The fast and rhythmic beats, the powerful and yet graceful dance movements along with the perfect synchronization with the steps makes it one of the astonishing dance acts among all folk dances.

After the dance gets over, rice and coconut is cooked by the people outside their homes and is offered to the Mariyamma devi. It is performed with the same level of enthusiasm and zest every year by the people of the village without fail. People also believe that if it is not done regularly every year, then problems will arise. Hence, they make it a point to perform Kangilu Nalike to protect themselves and the village from evil.

Although Kangilu Nalike has huge significance and was celebrated with grandeur in the past, its practice is unfortunately becoming weak in the present times.

In another version of the significance of this dance, it is also believed to be a dance to please the spiritual God, Koragajja. Tulunadu region is well known for its culture and belief system in spirits. There are many spirits the people believe and worship in – among these many people are devoted to Koragajja.

Koragajja is considered to be one of the most powerful and sacred spirits. People pray and promise to provide offerings to Him, when they face grave danger in their lives or when their certain wish needs to be fulfilled or when they have lost something. The Kangil Nalike is one kind of an offering given to please Him. It is a cultural extravaganza performed every year for the well being of the people as well.

In this dance, the central role is of the Koragajja and a number of dancers surround him and dance to the rhythmic beats. The Koraga’s character dances in an awkward manner at the centre of the dancers, and entertains the spectators through his strange performance.

For other interesting traditions and cultures in Tulunadu, you may visit this index. 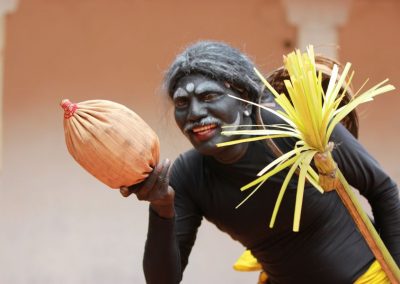 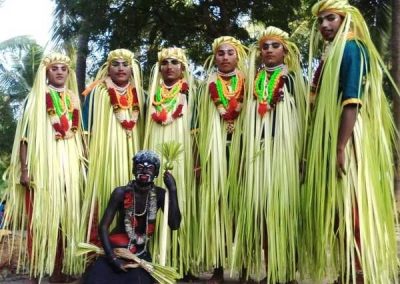 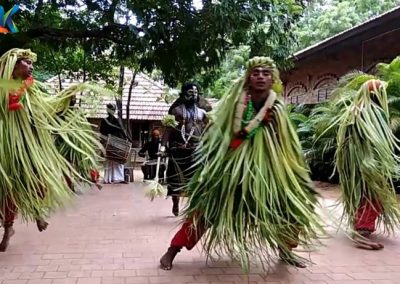 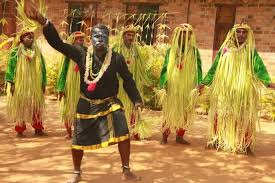 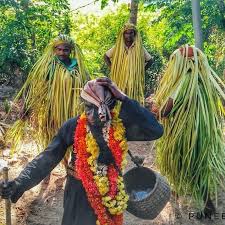