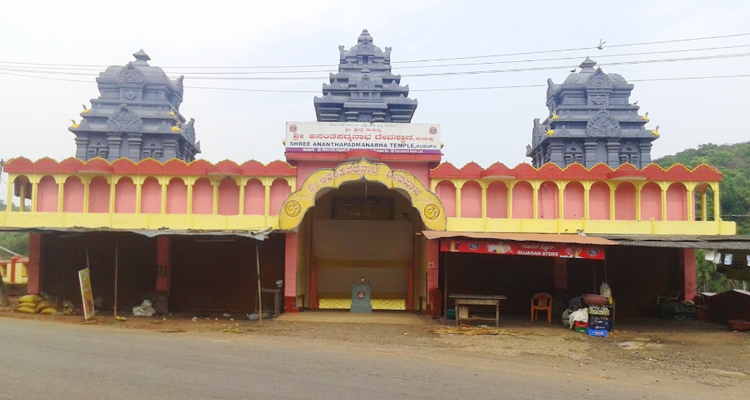 Kudupu Sri Anantha Padmanabha temple is situated in Kudupu village about 10 kms from Mangalore City along the Mangalore-Moodabidri route. This temple is dedicated to another form of Lord Vishnu and famous for serpent worship. Annual festival Shashti is a famous religious ceremony falls in December. Nagarapanchami, a worship of offering milk to Lord Naga, is also celebrated with great devotion.

Devotees visiting this temple also make it a point to visit Vamajoor Shri Amruteshwara temple which is about 4.6 kms away.

Once a King named Shurasena did some sin and humiliated him very much that he lost his peace of mind. He asked different Vedic scholars, priests for the remedy of how to come out of this sin. But Brahmin Vedic scholars told him to cut down his hands himself.  As the very cause of the sin were his hands and advised him to worship upon Lord Mahavishnu. King accepted the advice and did accordingly. He made two golden arms and adorned it in place of his lost hands. But even though of this atonement was done, he was very worried about his lost hands.

One day while he was a hunting animal in wild along with his army men, he reached the holy and peaceful spot of Bhadra Saraswathi Thirtha. He was very impressed by the peaceful atmosphere of the surrounding of the Bhadra Thirtha. He was surprised by seeing the relics of pooja done near Thirtha.

Meantime he remembered the advice given by Brahmin Vedic Scholars about worshipping Lord Mahavishnu. He then settled there and started to worship Lord Mahavishnu. As he intensely worshipped, Lord Mahavishnu appeared before him and inquired about his wants. King requested for restoration of his lost arms. By hearing this Lord Mahavishnu told him to build a temple within one day and his arms will be replaced as soon as construction of temple completes.

King Shurasena became very happy and become ready to construct a temple within a day. All the sculptors, architects got in construction work. The work even continued in night and the dawn was nearing while the temple was almost all in finishing stage, except the ornamental top portion of the sanctum. Early morning an ethereal divine voice came from the sky advising to stop the construction work as and where it is. King looked at his shoulder and his arms were restored in a miracle. King settled there and spent his rest of the life ardently worshipping Lord Mahavishnu.

Even today the temple does not have ‘Muguli’ (ornamental top portion on the sanctum). This absence has been a major source of intense discussion among historians, considering the Muguli is an integral part of any temple.

Subrahmanya Shashthi – In the month of November/December. Champa Shashthi.

Kiru Shashthi – In the month of December/January. 6th day of Pushya Shuddha.

Ashlesha Bali is one of the important Sevas in the temple. Except on Ekadashi and Annual Festival, in all other days this seva can be performed. This seva begins at 5 pm till 6.30 p.m. Since there will be a heavy rush for the seva on Ashlesha Nakshatra Day, the seva continues till 11 p.m. On that night, a meal will be offered to the devotees and participants. Giving individual attention to the seva participants is the specialty of this Kshetra. 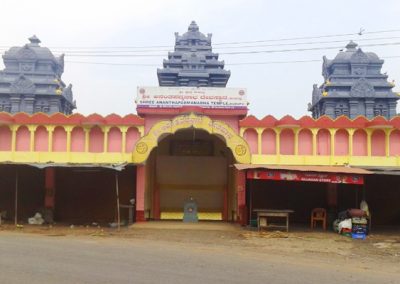 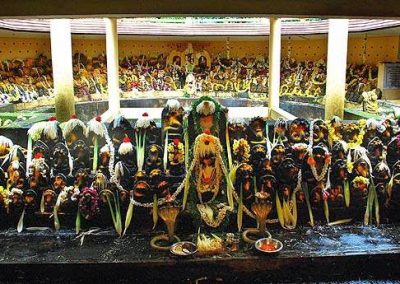 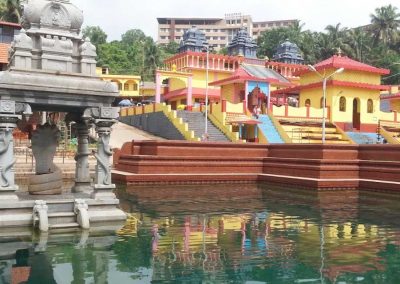