A family belonging to Kshatri kings from Mayappady of Kumbula ruled the area of Anantha Kody of Ulayibettu Village nearly 400 years ago. King Raamanthaaya had two nephews Krishna Sharma and Rama Sharma. King had gifted a land to both of them at Tiruvail. Lord Ganesha and Eshwara were their deity and had built the temples to them at Saale of Ulaiyibettu village. Devotees who travel to this temple from Mangalore also visit Kudupu Shree Anantha Padmanabha temple along the way.

Phalguni River flows by the north of this temple and is also known as Mrakandu Teertha. There was a dense forest beside bank of the river where Saptharishis lived. They performed yagnya and other rituals in the area front of the temple.

Since the King Ramnathaaya didn’t have children, he sought the blessings of Saptharishis, for which Puthrakaameshtiyaaga was performed. Thus King was blessed with many children.

As king had many children, his nephews felt very jealous. They laid a trap to kill the king by bribing the priest. They asked him to poison the teertha and give it to the king as prasada, which the priest accepted.

One day when king came to the temple to take prasada, he saw the priest shivering as he was about to offer the king the prasada. When King asked the priest, why he was restless, priest revealed the conspiracy that was laid to kill him by his own nephews. But king said as he was Kshatriya he will never take back his hand which he had offered to take prasada from the priest. And if the teertha contained any poison, let it turn out as a amritha for which he promised to build a temple to Lord Shiva and name it as Amrutheshwara. Seeking blessing, king drank the teertha and it turned to be Amritha.

Next day he installed a Shiva Linga at Tiruvana. He made necessary arrangements so that deity is offered pooja rituals. He ordered death sentence to his nephews, who laid conspiracy to kill him. He then bought an idol of Vishnu from Uppinangady and installed the same in region surrounded by trees and named it as Vishnumurthy. He ordered his minister to make required arrangements for offering pooja rituals. 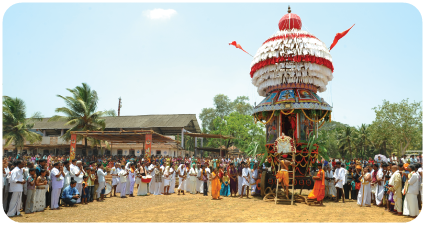 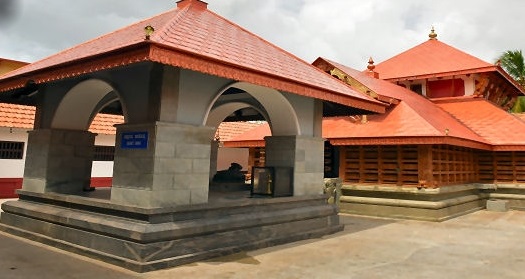