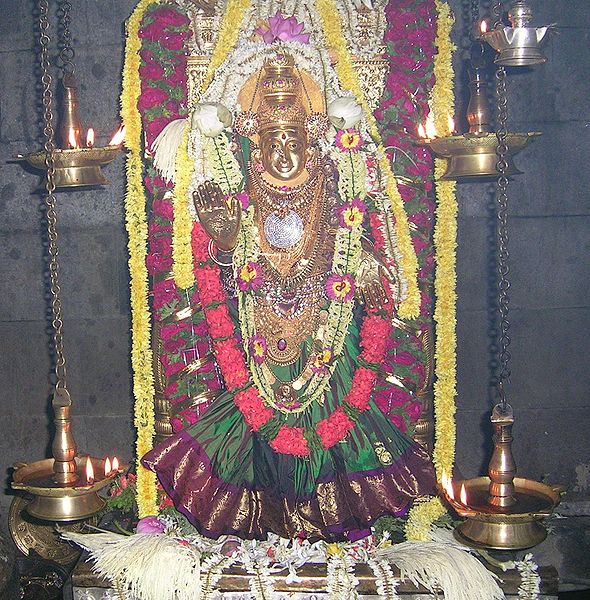 Mundkur Durgaparameshwari Temple is believed to be more than 1300 years old. Located in Karkala taluk, Mundkur is an amazing city of temples surrounded by the River Shambhavi on three sides (east, south and west). Around Mundkur Durgaparameshwari Temple, Mahalingeshwara (Shiva) temples are located in four directions – Posral towards South-East, Inna-Muddanu towards North-East, Ulepadi towards South-West and Bola towards North-West. The temple is 40 kms from Mangalore and 35 kms from Udupi.

Daily Annadaana is offered at the Mundkur Durgaparameshwari temple for devotees as prasada between 12.30 pm and 2.30 pm. During festivals like Navarathri, Deepotsava, Rathotsava, the Annadaana is offered even during night for the devotees coming from far away destinations. The devotees have constructed Sri Durga Parameshwari Sabhabhavana (Kalyana Mantapa) at Mundkur Durgaparameshwari temple premises where functions are conducted with nominal rentals. Sri Bhargavi Samudaya Bhavana has been added for the poor for organising their functions at a reduced rent or free, depending on the financial situation of the devotee.

The daily pooja timings at Mundkur Durgaparameshwari temple are – Usha Kala Pooje at 4:30 am to 5:30 am; Maha Pooje at 12 noon and Rathri Pooje at night 8 pm.

The Punarprathishta of Goddess Durgaparameshwari was done in newly built sanctum sanctorum in February 2006 followed by the Brahmakalasha. Considering the Golden Jublee year of Silver Palanquin at Mundkur Durgaparameshwari temple, a Golden Palanquin was dedicated by the devotees in February 2009. During the reconstruction of the temple, the original door frames in western portion of the wall of the sanctum sanctorum have been preserved in the temple premises. Kere Pushkarni is there in the west (today known as Sri Bhargava Theertha) and Ashwatha Vriksha in the northwest.

Legend has it that Goddess Durga Parameshwari slayed the demon Mundaka here as per Skaanda Puraana. The idol was initially installed facing West by Bhargava Rishi. This was at the request of Suratha Raaja after the prathistha of Sri Rajarajeshwari in Pulinapura, now known as Polali, before 800 AD. A researcher, Dr.P.Gururaja Bhat has estimated the age of the Mahishamardini idol of Mundkur as belonging to early 8th century, the oldest temple in the region. There is evidence of royal connections to Banga and Chouta rulers.

During Jain rule, King Veeravarma was a cruel ruler and dayllight robbery was common. He turned the idol at Mundkur Durgaparameshwari temple towards east to plunder buried riches from underneath the idol. Since then the idol is facing east. Around the same time, legendary warrior twins “Kanthabare” and “Boodabare” lived in a nearby hamlet called Ulepadi. They were great devotees of Goddess Durgaparameshwari of Mundkur and visited the temple daily, crossing river Shambhavi. These warrior twins liberated the area from King Veeravarma’s atrocities after a brave fight. The brave brothers then called the Chowta rulers of Mudbidri and asked them to look after Mundkur region (magane). They readily agreed and systematized the administration of Mundkur.

Many of these legends are known today by word of mouth from Tulu folk songs known as Paddana.

As a token of love and respect the Chowta King donated lots of land, two wooden pillars of a single Jack fruit tree, said to be from the Chowta Palace yard (the biggest and bulkiest in the area, which can be seen even today). The Chowta Queen has donated her precious stone studded ornaments to Durga Devi, which is used for decorating the Main idol in the temple during festivals and special occasions.

The Chowta Rulers visited the Mundkur Durgaparameshwari temple during annual car festival under the personal invitation from the Chief of Madmannaya family. The King and his Team used to relax at Sacheriparari, a place in the village border of Mundkur. The Stone Cot on which Chowta ruler is said to be using to relax can be seen here even today and was received by the villagers at Jarige Katte. The Chowta King used to participate in the final day’s Chendu-aata (Foot Ball Match) of the young villagers followed by Arasara Katte Pooje and Keredeepotsava. 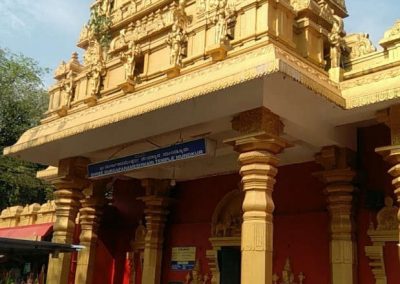 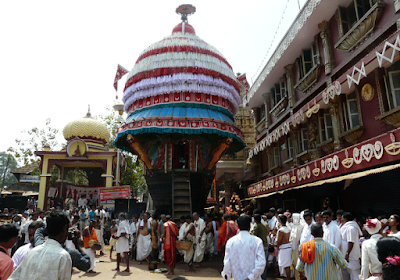 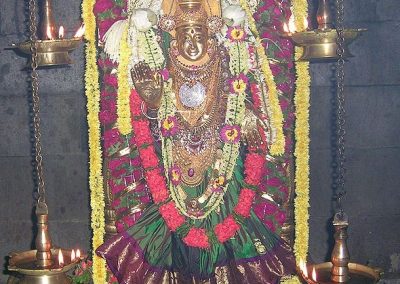 You can get there using this map