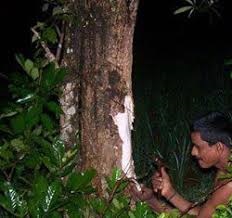 Aati Amavasya falls on the Amavasya (new moon day) in the Aati month of Tulu Calendar. Aati Amavasya also known as Deevige Karkataka Amavasya or Bhimana Amavasya, is celebrated in most parts of Karnataka, Andhra Pradesh and Tamil Nadu. It is believed that, on this day drinking a bitter syrup prepared from the liquid tapped out of “Pale mara” (in Tulu) can ward off health problems till the next Aati.

This is one of the important aspects of the Tulu folk culture and customs. Though there is no evidence of when the custom of Aati Amavasya began, but Tuluvas are respectfully following the customs followed by elders.

On the Aati Amavasya day every year, early morning people go to a nearby medicinal tree Pale Mara (in Tulu). It is also known as Hale Mara in Kannada, Sathanacho rook in Konkani, Devil tree in English and is known by its botanical name Alstonia Scholaris. Chunks of its bark are pounded to get the bitter juice “Paleda Kashaya”. Spicy ingredients and seasoning are added to be consumed by the family members in small quantities.

It is said that once a year, before consuming any food in the morning (before sunrise), at least a small portion of the Kashaya should be drunk to stay healthy from any type of stomach problems. With festival seasons soon to follow after Aati month, people in general will be eating many delicacies and tasty dishes. Consuming ‘Paleda Kashaya’ would protect everybody from unwanted stomach ailments.

Besides the above reasons, the bark of Pale mara is used in Ayurveda as a bitter astringent herb for treating skin disorders, malarial fever, urticaria, chronic dysentery, diarrhoea, curing snake bite.

After drinking Pale Kashaya on Aati Amavasya day, the family members are served with Metteda Ganji (in Tulu) or Menthe Ganji (in Kannada) which is a simple and nutritious recipe prepared out of rice, methi seeds (fenugreek) and jaggery.

There is a religious significance of Aati Amavasya, especially in the Shiva temples situated in the Tulunadu such as those of Karinjeshwara Temple at Karinja, Narahari Sadashiva temple, Kudroli Gokarnanatha Temple, Kadri Manjunatha temple and other places. Shiva devotees visit these temples in large numbers. In Shri Narahari Sadashiva Temple at Bantwal people take bath in four ponds with the belief that their sins would be washed away.

It is believed that on this day Lord Shiva was very pleased by Parvathi’s devotion towards him and accepted her as his wife. Parvathi is considered as the supreme Divine Mother and all other goddesses are referred to as her incarnations or manifestations.

Historically Tulunadu used to get a lot of rains during this season and hence the people could not venture out. Many times they used to fall sick. In order to avoid diseases and ailments, the earlier generations used to prepare traditional medicines to keep themselves fit and fine. People in Tulunadu visit Shiva temples and have a dip in the temple pond or have a dip in sea to ward off their sins.

During Deevige Karkataka Amavasya at Maravanthe in Kundapur, devotees take a sacred dip or bath in the sea here and strongly believe that with the blessings of Varaha Swami, all kinds of skin diseases will disappear.